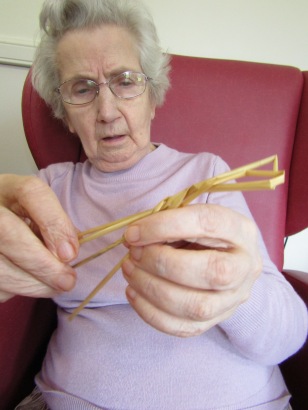 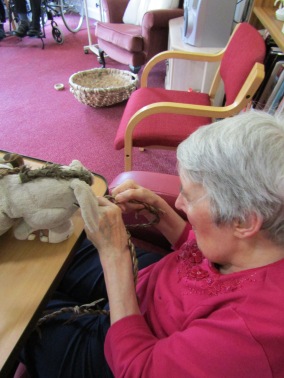 Dawn Susan brought her wonderful baskets and knowledge of basketry along to Blar Buidhe today, as part of the Woven Communities collaboration project with St Andrew’s University.

Staff and residents participated in trying out the baskets and talking about memories related to using or making them. Residents found staff from other countries  trying on creels particularly hilarious and chat was leaning towards gratitude about not having to carry peats any more. It was clearly hard and heavy work. Messy too, as we learned that creels weren’t only used for carrying peats – seaweed and manure too, as well as potatoes.

Maggie supported people with Gaelic as their first language to participate fully in the session and Dawn was able to establish that woven horse collars are more of a Uist creation, with Lewis horse collars largely having been made of leather.

We learned that rope making was a trusted craft – people were lowered down cliffs on such hand made ropes to collect sea birds for food. Dawn was finding her trials with marram twined ropes did not hold once dry and that the joining process needed to be longer and stronger than she first imagined.  One lady explained that the boys being lowered down the cliffs would only trust ropes made by their own father.

Bella said that her mother was a Herring Girl and she recognised the shape but not the size of the oval herring basket.

I’m not sure that our twining efforts today are going to produce heirloom items such as Dawn’s beautiful baskets but it was a lovely, cultural way to spend an afternoon and many residents benefitted from having something to work with in their hands. I could see that a couple of the ladies did have some hand memory there and they enjoyed making the movements and creating a piece of twine. I felt, for a moment, through her peaceful facial expression, that one lady was back in her mind’s eye by the fire with her mother, twining on her fingers by the firelight.

We will be taking the session to Solas Day Centre and Western Isles Hospital shortly, before we head back to Uist for the making sessions.