Alzheimer Scotland run a monthly (last Thursday of the month) Carers High Tea at An Lanntair, where carers come alone, come together with the person they care for, come with a friend or relative and just gather, chat and eat some lovely food together overlooking the ferry and pier at Stornoway Harbour. If you would like to come along, please book through Ellie or Marion at Alzheimer Scotland, Bells Road.

On the menu today were langoustines, dahl, mussels and a burger, followed by a chocolate and walnut brownie with salted caramel sauce, lemon and pistachio tart and rice pudding with rhubarb compote. 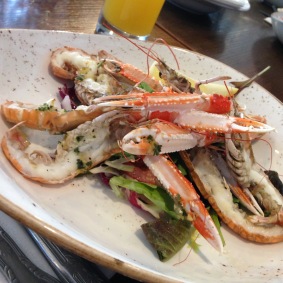 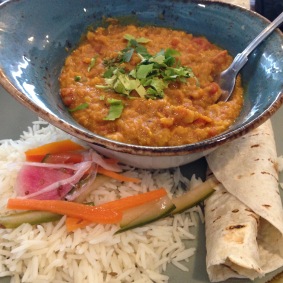 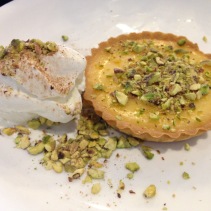 Today’s chat included love birds, films, US Presidents (and their relatives), women in politics, documentaries and BBC iPlayer and the accessibility of recorded programmes while on shift work, travel, food, cafes and restaurants, and music – there was some hilarious confusion over Rag and Bone Man….

It was a wonderful day today, which started with Granny baking for the Western Isles Hospital ward cafe. Today, we had a Welsh Bara Brith, which is a fairly sturdy spiced tea soaked fruit bread with a honey glaze and butter, which comes from my Welsh granny. Also a sponge cake with cream and stewed apple, which is inspired by my Portsmouth Granny, who taught me to bake and used apples (and cream) a great deal.

Next was a 9am (ish) meeting at the Health Board with Denise Symington (twitter @pfpinhswi) and Marion MacInnes (twitter @alzscotmmac) where we discussed the forthcoming Memory Garden work, the hospital ceilidhs, Dementia Awareness Week, film club, the DEEP ward vinyl, social media communication and many other things.

Next, a quick dash back to the (thankfully close) office, where a morning of printing and laminating took way longer than anticipated and I barely made it out in time to the hospital in time, although I did take a second to admire the incredible Barra Bunting at An Lanntair and take a quick picture while I could!

At the hospital, I supported the hospital ward ceilidh, where we had 7 people from the wards, two fantastic volunteers and myself (Paula) together with senior nurse Jimmy Myles, several student nurses and nurses and Denise Symington and Helen Gallacher too. There was a joyful buzz while everyone enjoyed and discussed Alex Boyd’s images for the forthcoming DEEP project vinyl. Joyful munching of cake and slurping of tea, too. I left the images in the Erisort Day Room for anyone to look at again, at leisure.

After a quick clean up, I went next door to Clisham ward to ask for responses to the images there too. We had some lovely discussions and conversations, comments and responses. I left the A4 laminated images on Clisham ward for Etta, the activities lady to continue to work with.

Homeward and a quick bite to eat before typing up the responses to the images that Alex gave us, blogging here, tweeting and facebooking and responding to the other DEEP vinyl colour work that was done while I was working today.

A fantastic day, that I am certain was helped along by Denise’s fantastic coffee and treats first thing this morning and the incredible images that it was a joy to share. 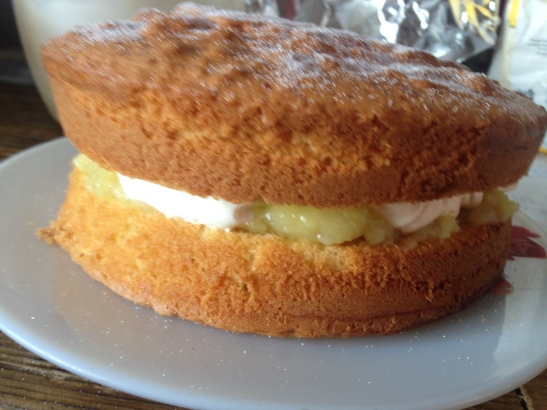 Baking for the hospital ceilidh 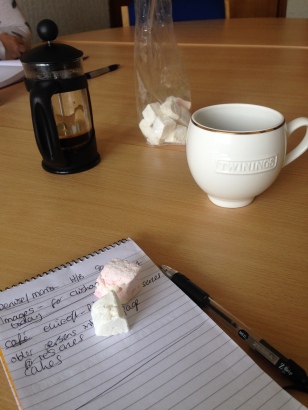 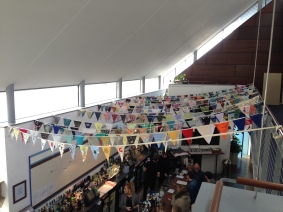 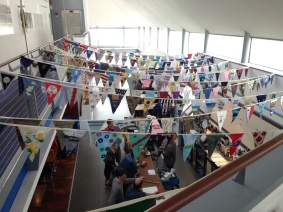 Barra Bunting over the cafe bar…

@alexboyd images being discussed and enjoyed at the ward ceilidh 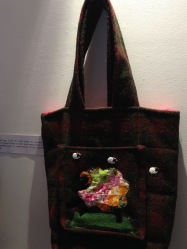 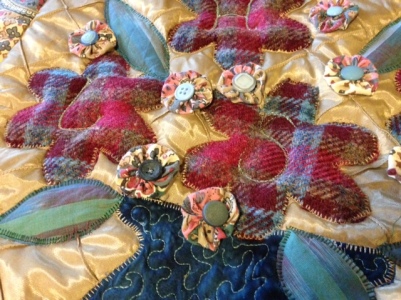 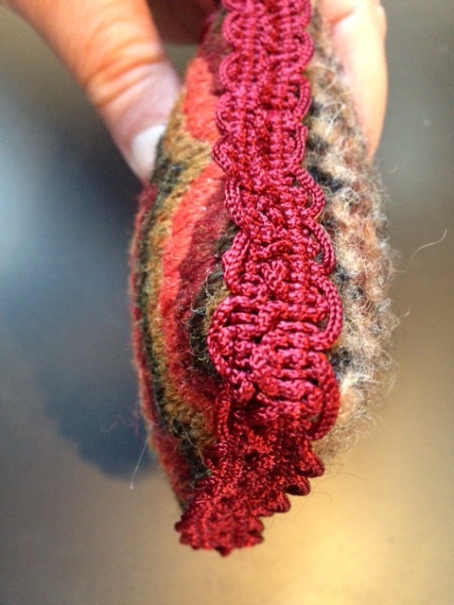 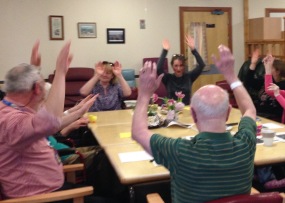 Today’s adventures by Maggie Smith
Met a 95 year old lady for the first time today and she tried to teach me how to crochet “With knitting I can watch the telly or read a book but with crochet you have to count the stitches. Crochet makes me concentrate” she explained. Showing me large crocheted circles of blue, yellow, pink and white with perfect pattern and even tension throughout.

Sometime later, I realised just how much concentration you needed to make the base ten chain stitches into increasing triangular panels. Also that the math of the regular pattern with each increasing circuit needed total mindfulness. I had to admit defeat.

Today’s completed crossword was by her side and her favourite TV show Pointless was due soon.

Crocheting without glasses, she could also read the radio times schedules and told me about the lives of the two regular Pointless presenters. “There is a lot of rubbish on the TV sometimes” she said “But I like hearing voices in the house”.

At the Care Centre a withdrawn lady sat in her room .After a few melodeon tunes with no response, I got down on the floor and met her gaze. “Just lovely” she said. “My husband played the melodeon”

Knowing this ninety year old lady had composed Gaelic poetry I enquired about the view from her home and four beautiful verses about the local landscape flowed.

Then feigning forgetfulness I recited a verse which she had given me five years previously, “Oh brist ‘s gum briste ..
”Am post” she says “S chaidh an geata chun na croich”. Not the verse I was expecting and the context made me roar with laughter. We shared the joke about the dilapidated gate.

For the first moment today, I caught sight of the spark in her eye, I recognised it from our previous acquaintance.

Another verse: Hai o hiaram cha ghabh mise Siarach halting I heard the last line of the verse, same volume Cha dean e càil ach biathadh nan òisgean.
We had a giggle weighing up the prowess of an Uig man against a Westside man.

What a privilege to spend an hour with this fountain of song from my own culture. Bha an t-seinn anns na daoine . “We were a family who sang songs” she volunteered

Taking my leave, the care assistant having enquired about responses during my visit, was taken aback by the result of my elicitation techniques.
Bu mhath do naidheachd! That has given us a big lift, this lady has not been speaking for weeks and we didn’t think she remembered anything much, far less verses of her own lovely poetry.

As I left the caring warmth of their hospitality, I heard “Please come and bring forth the songs again, very soon”

We have been working with the Library service on a new project, which will support isolated people across the community to access library materials and archives.

This will be launched alongside our first two collaboration Memory Boxes during May in several locations across all of the islands. The sticker for the front of the Memory Boxes is being completed now and the contents will be completed when they reach Benbecula.

More news coming soon of when and where the launch events will be, so that you can go along and see what is available to book.

Here is a link to our project working document on our bilingual work. We have discovered that bilingualism in fact is only a small part of the very diverse communication methods we discover and use with people across our community and that this is all closely linked to objects, memory, movement and patterns.

Here is Jon’s report about the Woven Communities work we have been doing over 16/17. Link above. 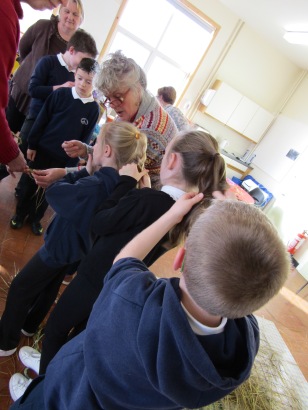 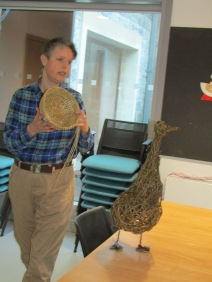 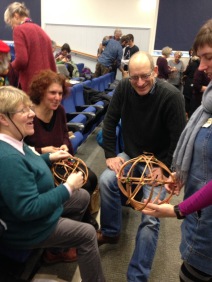 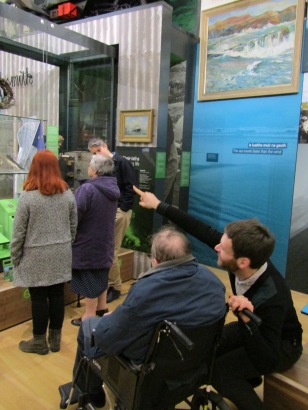 This week at Trianaid and Sacred Heart Care Homes we were reminiscing with items from the kitchen (cidsin)…bottles, jars, apron, tea cosy and butter pats…

They were used to keep rennet in.

We kept vinegar in them.

They were used to measure out quantities. I think it’s a…specific measurement that one so it would keep you right with your cooking.

They’re precious now those. They don’t make them like that anymore keep a hold of that one.

They came back with the sailors – you used to get black jars like that too. They would bring them back from sea, they were travelling all over the world these men.

People started getting rid of them and throwing them away so they’re hard to find now.

You would see them just dumped all around outside houses.

Line them up on your window and put flowers in them.

Made to last, you don’t get that now!

Oh yes we made home made jams with the long stalks….rhubarb

You can actually boil it – on the east coast we would put the mince meat in the jar and steam it cooked.

If you have that you don’t even need a doctor.

I kept it on the shelf above my bed. (box bed)

A good bottle too – you can keep it and fill it with your own.

Oh yes, it had a very distinctive smell, I liked it. It was like an ointment for aches.

I used to get sties in my eyes when I was at school so I had to use those with a special solution to clean my eyes.

I had a glass one at home.

Yes, it’s a beer bottle – bigger than the whisky bottle.

I saw plenty of them.

Are you having a dram?

What’s written now on the top of that?

Brown to hide what they were drinking! I remember the whisky it would be poking out the pockets of all the old men who would be coming in when I worked in the office. They would be trying to hide it by pulling their jackets over the top of it!

You’ll be on the pan all day between the two of those!

They serve the same purpose.

I’m not sure what was in it but it’s a good heavy based bottle so it would have a lot of uses. You could use it for feeding if you put a top on it.

Where did you get this?

We had a thistle stamp. And there was one for the shortbread too.

They were kept so clean. Just boiling water to wash them.

They would last a lifetime.

We were artistic with our designs on the butter. All sorts we’d put on.

We just left the lines on and then onto the next job. There wasn’t much time for the designs.

They had to be immaculately clean – you would leave them in cold water to get them clean. 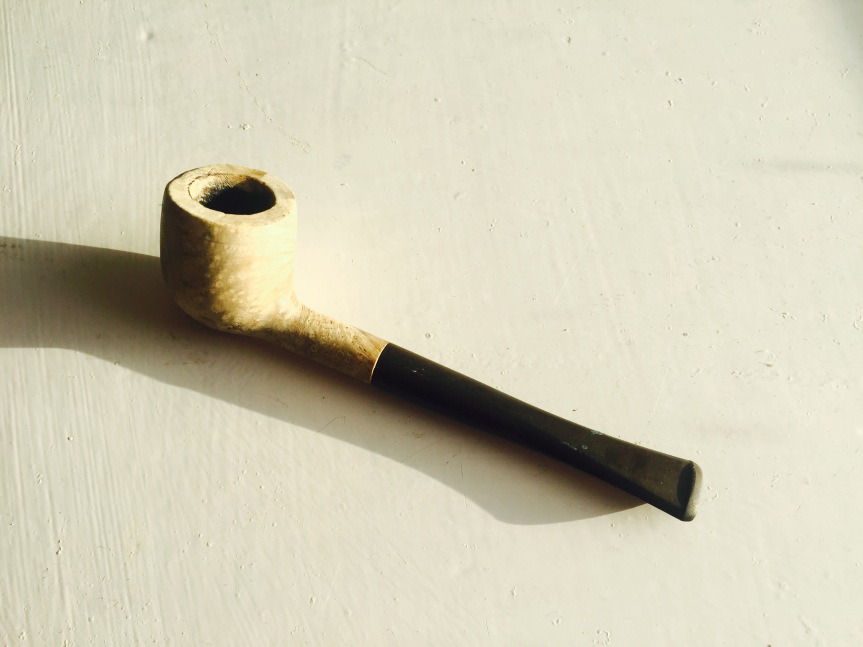 Is it a clay pipe? Wood I think.

I never smoked so I’ve got healthy lungs!

Oh tot tot I don’t want to touch that! 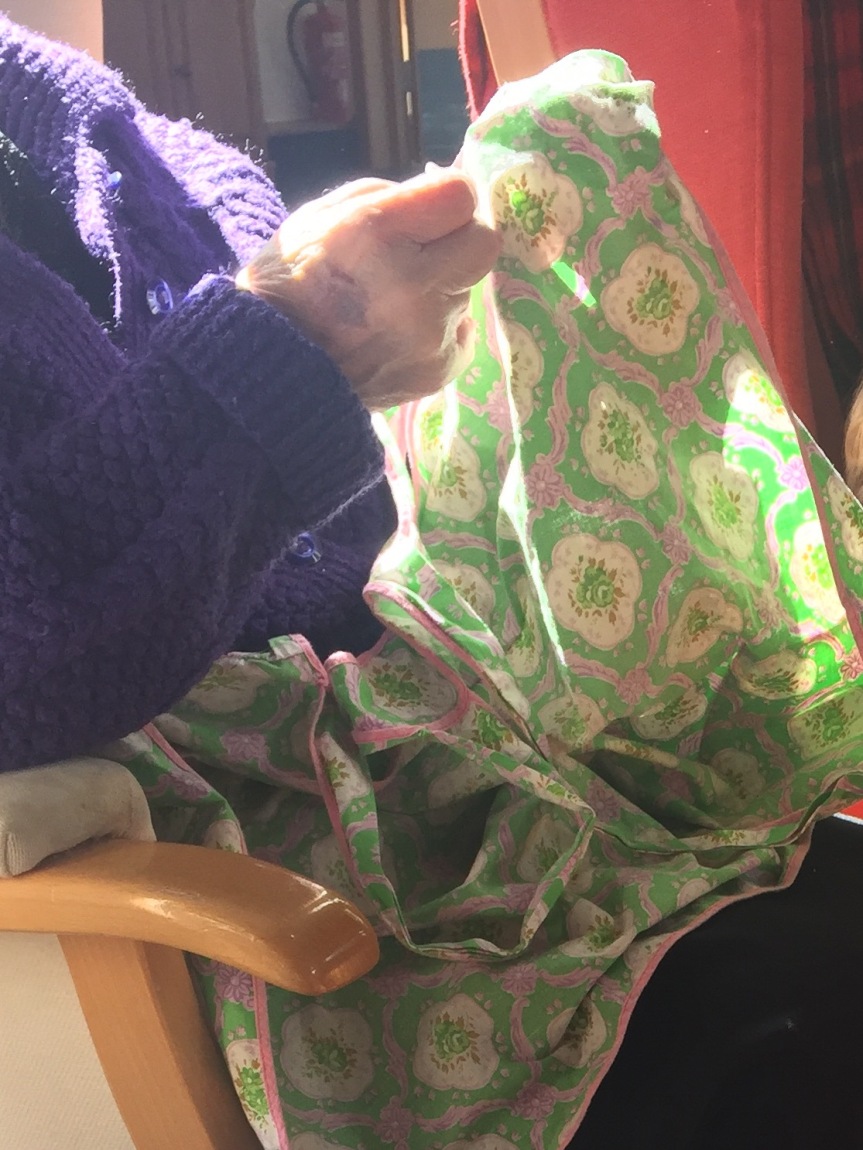 What size is that apron?

I had a wrap around one…like in the film The Steamie…mine was blue and you got black ones. They wouldn’t show the dirt. You could just buy them in the shop.

Oh yes I had my own pattern. Back then in every house there was a corner set up with the patterns and sewing and washing and ironing.

That would keep you well covered.

And you got the half aprons.

That one has a pocket.

Oh yes I sewed my apron – I could do everything!

It’s beautiful the apron, a good fit on you. That would really protect you while you were working.

I remember making my own one of them. I sewed it myself. Oh yes I made clothes for myself. There’s a suit here somewhere and that was the last thing I ever sewed – a jacket and pants. It was a hand turn machine I used.

I remember my mother making a dress for someone from some fabric off the Politician, beautiful fabric. That was a day you could separate the wise and the foolish ones because it wasn’t just whisky onboard there was much better things like bicycles and fabrics.

Here you can put that on your head and stick your nose out where the handle goes….heehheehee!

Very cosy and thick, and look at the inside that’s a lot of work gone into that. That’ll keep your tea warm.

There is a Programming Meeting at An Lanntair tomorrow, to update the team on the next six months, so here is our list of projects and events planned for the next six months  April – September. Check our facebook page for events listings (@aroraanlanntair).