Tuesday Ceilidh at Western Isles Hospital today was a lively session with ten people from the wards coming along at one point, although some came and went as they needed for their own comfort levels.

Three NHS staff (plus staff members supporting people to and from the session) came along, Ellie from Alzheimer Scotland and myself, Paula from Arora. One of the NHS Dementia Champions were there.

I took along many harvest items, inspired by Kate’s Harvest film of the quernstone from Taigh Chearsabhagh and that lovely quern song. The veg was from my daughter’s allotment and it provided many familiar items to look at and hold, such as courgettes, beans, onions and marrow. There were also some fantastical oddly shaped, colourful new varieties of squash, gourd, and even some cucamelons!

We laughed at the weight and size of some of the vegetables, especially the mutant-huge yellow courgette.

I brought along some apples with pink flesh from my Dad’s trees. We passed them round for the fresh, fragrant smell of apple and the bright colours. Some were devoured immediately. No pesticides, no fertilisers, just fresh old English variety apples. We think they are called ‘Sops In Wine’ as a variety.

We talked about the Harris Tweed wedding dress in the Museum and one lady said ‘I remember her parents, both school teachers and I think her father was a counsellor.’

We talked with one gentleman about the joy in the skill of fishing ‘Pure pleasure, when you know what you’re doing’, he said, munching into a second piece of rhubarb and custard cake. ‘Can you come home and be my baker? she aked’

Another gentleman was more about farming than fishing, but he was really interested in the varieties of vegetables, the bright colours of the rainbow chard, the colours and knobbly shapes of the Turks Head Squash. He was also really interested in the Harris Tweed samples. ‘That’s beautiful’, he said at one pattern, in pale blues with a red stripe. I asked if he was a weaver – no, but his mother was. He really loved the image of North Uist that Ellie brought along but couldn’t place the cottage.

One lady with verbal communication difficulties managed a few words but really enjoyed holding the vegetables and weighing them in her hands. She enjoyed the fresh smell of the apples.

Another lady managed to smile and engage in conversation about veg and the village magazines for a little while before she needed to go back to the ward. She ate a pretty pink cake, too.

I spent some time with a lady who tried the Harris Tweed on for size as a skirt and imagined what that would be like. She didn’t like the post box red tweed but really loved the deeper cherry-maroon colour. This lady enjoyed reading some words from the pictures and village magazines on the table.

The student nurse had been on Clisham Ward for a fortnight and said ‘I’ve never seen her so engaged and reading in the past two weeks and I was surprised that (another lady) managed to engage and enjoy it for a little while.

It is proven time and time again that time together, new faces, the friendly buzz around the table at the Tuesday ceilidh is really priceless for supporting people’s social and communication needs. I managed to initiate a conversation across the table between the two gentlemen about fishing, albeit a brief one.

Another lovely opportunity today arose when a lady was preparing for her husband to return home tomorrow, and Ellie from Alzheimer Scotland was able to give her resources, plus I was able to offer Me Time sessions for carers, Art Ceilidhs for her husband and for them both together, through the pocket cinema sessions at An Lanntair.

The cakes were Great British Bake Off inspired with teacakes from this past week and with a fruity cake in the form of rhubarb and custard from week one. 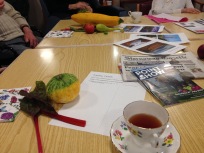 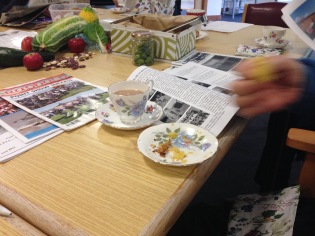 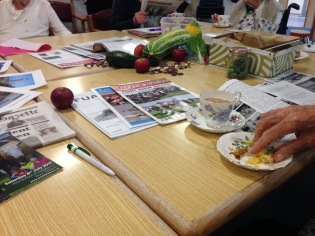 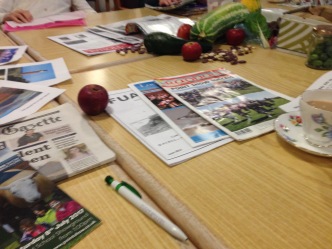 One thought on “Tuesday Ceilidh”