This is the Cianalas An Lanntair Dementia Friendly Community newsletter for Autumn 18, including all of the news from the summer. Spoken word link to Soundcloud here

It’s 1st October already and a decided chill in the air, which has been the talk of the office this morning. It is mid-year evaluation time, with statistics gathering and report writing, too.

We are currently working on completing the Barvas Ware project, which we have been working on all summer, handling and re-making pieces. The Autumn season will see some 3d printing in collaboration with the Library and Museum services and a beach firing Raku-style afternoon as we complete the dried pieces. Look out for our session events, which will be listed on our facebook page.

We have started drafting our section of ‘The Material Culture of Basketry’, published by  Bloomsbury through our Woven Communities project with the Department of Social Anthropology at the University of St Andrews. We will pass on news of when this will be available as we hear about it. 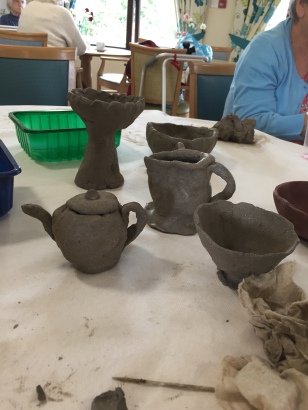 Maggie Smith has been working on two series of events, the Lochs Social Group, which is a monthly event at North Lochs Community Centre (Next event Weds 17th October), plus a Gaelic singing group at Dun Eisdean care centre in Stornoway every fortnight on a Saturday. This is linking in to our Ceilidh Trail project, which is starting later in the Autumn. Again, events will be listed on facebook.

We have been successful with two funding pots from DEEP, The Influencing Grant is for £2000 for filming community, heritage and arts events in order to share them with people who are unable to attend and the second one is a Working Together grant for £7500, for working with Lucy Robertson (our PhD student in sonic textiles from Duncan of Jordanstoun) and Dementia Friendly East Lothian, on creative ways to build and maintain friendships. Our filming project has already begun with Kate Macleod making a lovely film of the Bayhead Friday ceilidh, which we will share shortly.

Our dance project through DEEP is just finishing now, Louise Davidson will be undertaking one more dance session with us with Maggie Smith and Muriel Anne Macleod, in order to complete the filming of the project and then there will be a filming session of interviews with Maggie and Louise, in order to support people working in care centres to confidently offer future appropriate movement sessions.

We have supported Alzheimer Scotland cafe and day centre sessions over the summer with arts/cultural activity from Chris Hammacott, Dawn Susan, Euan Macleod and Jana Grimm. 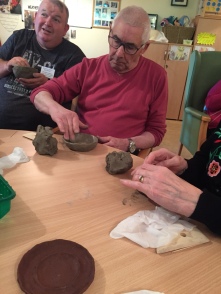 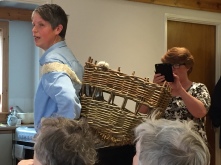 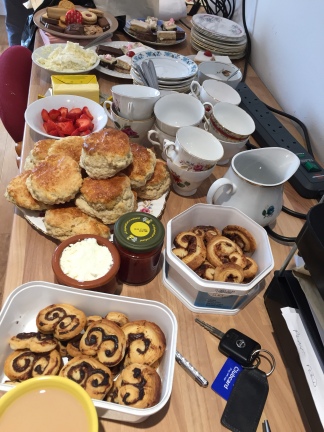 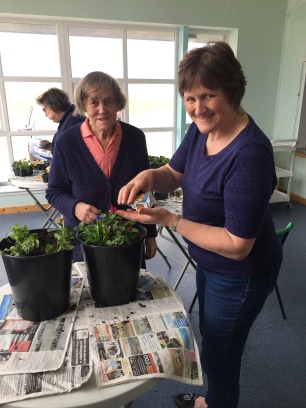 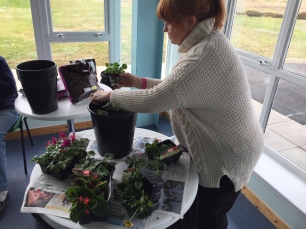 Chris Hammacott completed the Memory Tree wall hanging with us for the Sanctuary space at Western Isles Hospital over the summer and it has been used to leave mementoes and tributes to lost loved ones with the pinned on butterflies, leaves, dragonflies, and the ribbons. We also printed up and installed Alf Sludden’s image of Cliff Beach in vinyl format in the Sanctuary. 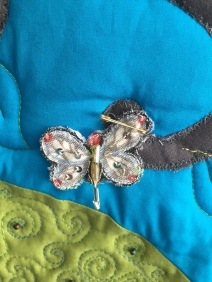 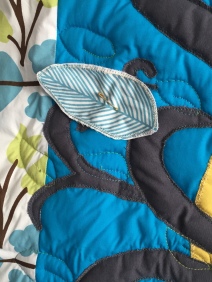 The Sonic Flock project is completed, with the delivery of some wonderful, tweeting birds, which we have distributed to the groups who were interested in receiving one. One blackbird joined in with a dance session at Bethesda care centre and another is perched among the resources at Western Isles Hospital. The project has developed into the new funded project by DEEP, so we can expect more innovation and creativity in communication and self-expression through this project into next year.

This summer, we began the ceilidh trail project, through the input and responses of the people we have been working with. Euan Macleod came to sing Gaelic songs on Clisham ward and he was asked for some requests, which he learned in preparation for the event. At the next community ceilidh, which we held on the west side of Lewis, at Horshader Shop, we noticed a wonderful connection between two women as Euan performed the songs he was requested to learn for this group and we noticed that a lady connected with the song as one that her mother sang to her. The communication between one lady living in hospital and another lady living in a care centre, unable to meet in person, was so moving that the ceilidh trail idea grew from this. A series of ceilidhs involving traditional, local songs, with village variations, additional verses and lyrics, across all of the islands, in order to perform, record and share local knowledge and the joy of a ceilidh gathering. 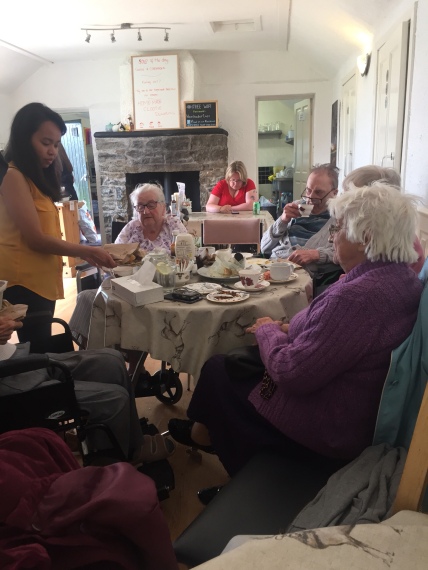 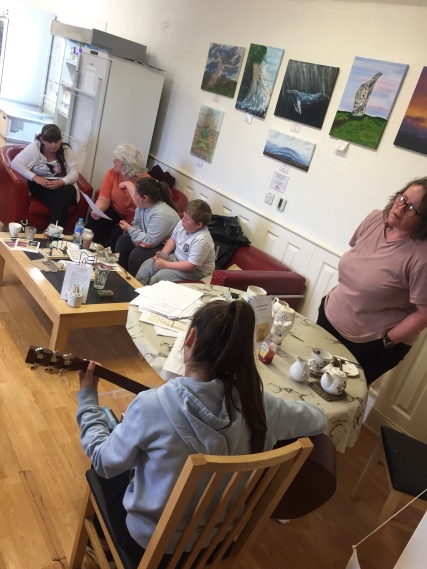 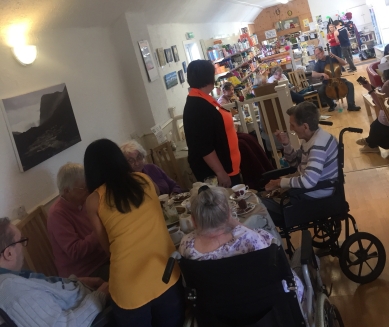 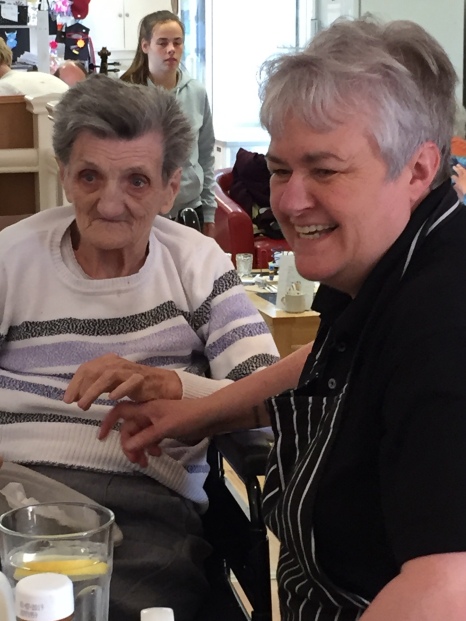 Our peat cutting project concluded with a picnic and a peat walk with a creel made by Dawn Susan at Shawbost, the village where the gentleman who taught her to weave baskets was from. A mini cruach was attempted. Much to the hilarity of those who know how to build a proper one. 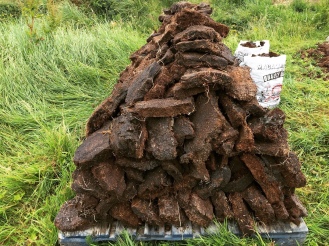 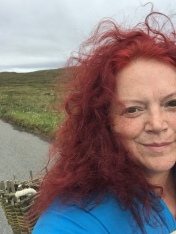 During August, we shared the Purvai South Asian Arts Festival from An Lanntair with several sessions involving Tabla drumming, Kathak dance and some intergenerational working with Grianan and Solas. We shared the festival in several care centres and in hospital. We even did a little DriveTime radio session with Pearse on Isles FM. 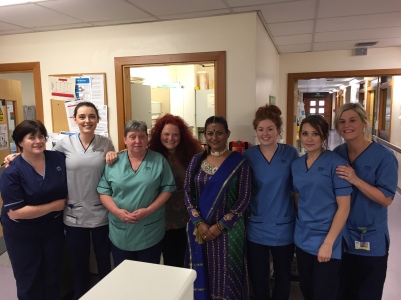 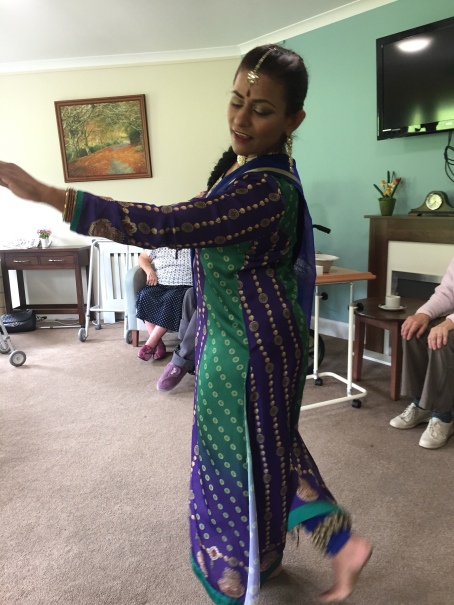 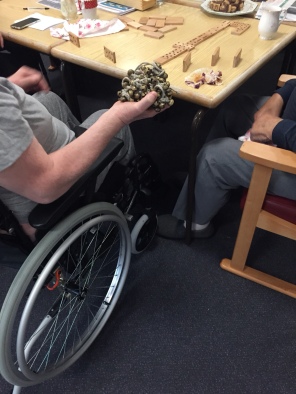 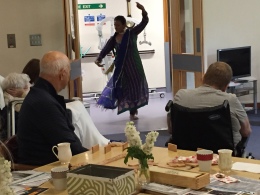 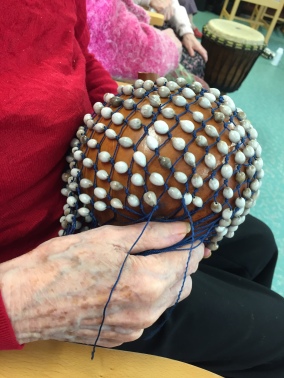 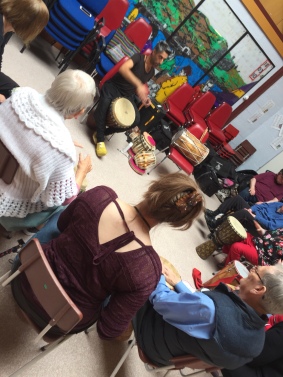 We have been working on our Dark Skies wall hanging at Harris House with Chris Hammacott. The residents have talked at length about views from windows out across bays, where fishing boat lights could be seen and conversations between boats and the harbour team heard from tuned in radios on the windowsill. Tilly lamps were very much part of night time memories, in the window, seen from inside or outside. Chris came along to a planning session with a mood board and some textures, fabrics, and we have been making recordings to install in the completed piece. The hanging will be installed around December and there will be an event around the Dark Skies festival in February 19. 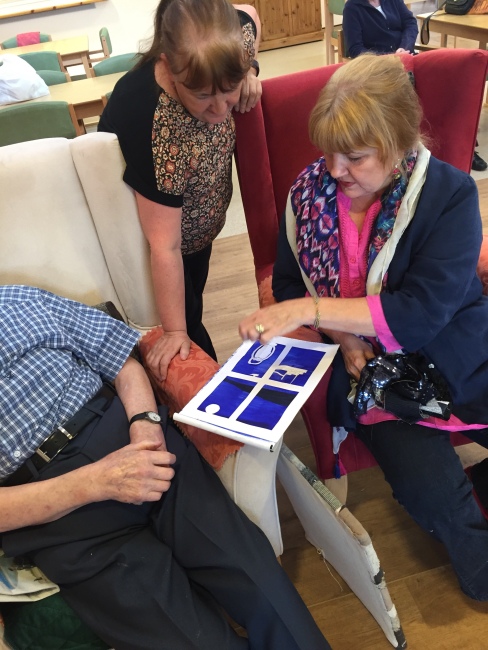 The Tuesday ceilidh happens every week at Western Isles Hospital. Alzheimer Scotland have created a lovely film about the event, which you can see here. Over the Summer into Autumn, we have taken along the Purvai festival event with Kanchan Maradan, a sewing box event with Chris Hammacott, Louise Davidson, a dancer, one of our funders, Lesley Galbraith and the handling collection of the Barvas Ware. Alzheimer Scotland has also created a film about their community cafe sessions, which we are featured in as we frequently offer arts opportunities at these cafes. 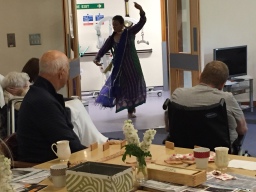 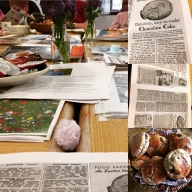 The Life Changes Trust Gathering is on 10th December in Perth, if anybody would like to come with us. DEEP gatherings happen several times a year as well.

Next year, we are planning an entire year of photography. We will be calling upon several people working in photographic arts and print making to support a year of photographic discussion and intergenerational exploration as a community. This will culminate in the Eyes as Big as Plates international portrait photography project, which was first featured in our Cuimhne exhibition. 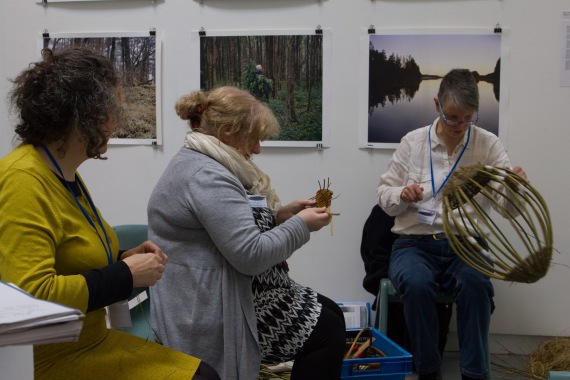 So that’s it for the Autumn newsletter, there will be a new one as we head into winter – please look out for our events relating to completing the Barvas Ware project with a beach firing day and a 3D printing session at the library. There will be an exhibition of completed pieces too. The ceilidh trail will be starting up shortly, so there will be a planned series of events across all of the islands coming up, in collaboration with Ceolas in South Uist.

Just a little footnote – there is an online course on arts and dementia with futurelearn that I’ve just completed. It has a lot of university research content and content from people living with dementia. I’d recommend it to anyone with an interest in dementia and the arts.